This is a late entry (and my first ever) for the Accretionary Wedge, hosted at Highly Allochthonous. I was on a geology field trip, so hopefully not too late! 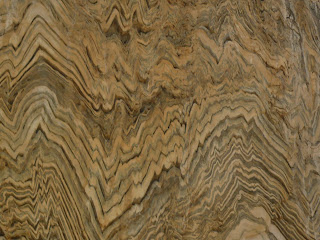 Too high up to get scale - see below.
This is my favorite geology picture because it represents an "A-ha" moment.
When I took 101, I basically ignored sedimentary and metamorphic rocks. I figured I had to merely pass those sections, in order to continue learning about volcanoes and earthquakes and cool stuff. My 101 class didn't have any field trips, so this preconception wasn't really challenged. Of course I'd seen rocks of that sort before, but somehow had never paid attention, even to the Grand Canyon.
This lame attitude tapered off, but did persist for several years.
Until I drove through King's Canyon National Park in California. The rocks there were so incredible, and you could really see them: not something that happens much in tree-covered western Washington. There were quartz veins and exfoliation and uplift and craaaazy deformation.
It really opened my eyes to aspects of geology I had brushed off, and helped me realize that the importance of being receptive to learning and curious about the world (instead of being a pretentious dilettante.) It illustrated how all the processes that create rocks and shape our landscape are dynamic and fascinating and exciting, even if they aren't sexy or dramatic or catastrophic.
I don't know what kind of rock this is or how it came to be here (I couldn't stop for more than a minute.) But I look forward to learning enough to be able to discuss it! 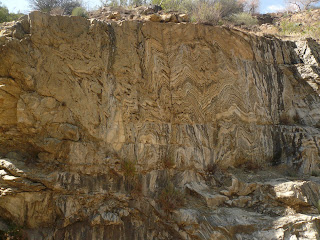