This Accretionary Wedge, hosted at Research at a snail's pace, is focused on desk-crops. Normally, this would be very exciting – I have a healthy assortment of rocks. But, unfortunately, I put all my rocks in my storage unit when I moved to Idaho for the summer.

I only remembered about this Accretionary Wedge once I arrived in Oregon with four boxes, none of them containing rocks. Luckily, before I went to Phoenix last week, I was helping clean a bookshelf at my parent’s house in Washington, and happened to take some pictures of my mother’s minerals.

My mother (a painter of caves – seriously!) has a soft spot for colorful minerals and rocks. These are actually examples from her stash of minerals inherited from my grandfather, who was into rock-hounding. My mum has some great childhood stories from these trips, including “Terrifying Mine Experiences Involving Cupcakes,” and “Innocent Encounters with Canadian Mounties.”

I haven’t studied mineralogy much yet, so I’m mainly going to reference that bastion of scientific accuracy: wikipedia. 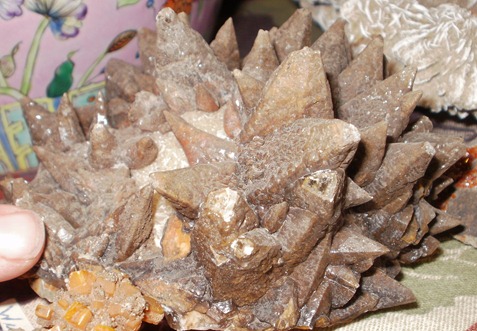 This Death Tribble is a piece of dogtooth spar, or dogtooth calcite. This usually consists of acute scalenohedrons: twelve triangular faces roughly making up scalene triangles.  They need standing water to allow them to grow, and so are frequently found in limestone caves. (My grandfather, I’m sure, found this in a rock shop – he wasn’t a caver, much less a cave-vandal.) 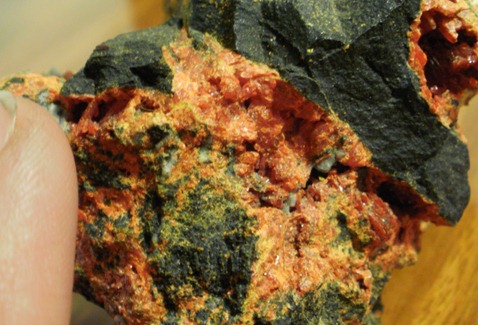 The only spooky thing about orpiment is that it’s a highly toxic cocktail of arsenic and sulfide, originating through the rapid solidification of hot gases at fumaroles, hot springs, and hydrothermal veins. It can also occur as the decay byproduct of realgar, a mineral of a similar composition that is frequently also found in conjunction with orpiment. (I’m wondering if realgar is in this sample, based on its appearance in google images.) Orpiment has historically been used for poision, medicine, and paint pigment; its present uses include semiconductors, firework pigments, and as an ingredient in Indian depilatories. (Perhaps: “Extreme Hair Remover: Now with Arsenic!” ?)

Great examples of deskcrops. Go Mom! You really do come from a family of rock hounds.