AW #30: The Moon is Made of Toasted Coconut.

The Accretionary Wedge #30 was a Geologic Bake Sale! Baking is one of my favorite hobbies, and I wanted to do something new and exciting for this challenge.

When I saw this recipe, inspiration struck. The flakes of coconut lay so lightly atop one another, as though they were gently supporting each other without actually touching… 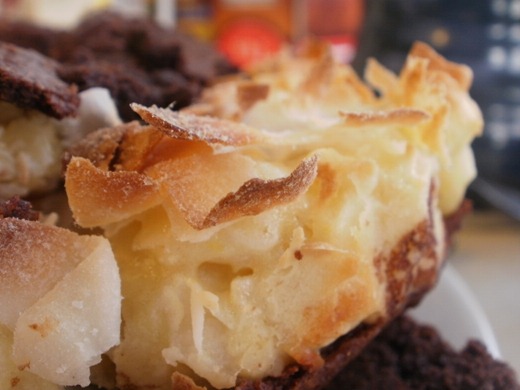 … which is exactly what happens on the moon!

Regolith is akin to soil on the Earth: it’s the layer of unconsolidated material over the bedrock. The moon’s regolith is composed of  bedrock pulverized by meteorites and “micrometeorites” – meteorites that are under a millimeter in size. Over the long life-span of the Moon, these micrometeorites have succeeded in completely altering its surface. (Just goes to show how concentrated effort over time can yield immense results!)

The top portion (3 – 5 m) of the regolith is composed of really fine-grained, loose particles. These sort of “float” on the surface: they are held together in layers by Van der Waal forces. (Van der Waal forces occur when charged molecules are very gently pulled toward oppositely charged molecules, and are very weak.) This is very similar to the uppermost, lightly held together layer of coconut.

The bottom portion of the regolith is more solid, and frequently referred to as the “megaregolith.” This is a layer of very fractured bedrock, 2 – 3 km thick on the highlands, and about 1 km thick on the maria. Here, it’s the more consolidated layer of coconut.

Much as Earth-soil has different varieties, the regolith has two different components: glass spherules and agglutinates. Glass spherules form when melted rock from a meteor impact solidifies in mid-flight, not having enough time to form a crystal structure. (Similar to how obsidian is formed very quickly from lava.) Agglutinates are glassy breccias composed of rock bits and vesicles containing gas from solar winds, all held together with rapidly melted rock.

Under all of that is the bedrock of the moon, anorthosite and basalt. I decided to have a simple basalt/brownie bedrock – this section of the moon is somewhere in a flood-basalt mare (or "sea”,) to account for it’s thin layer of megaregolith. 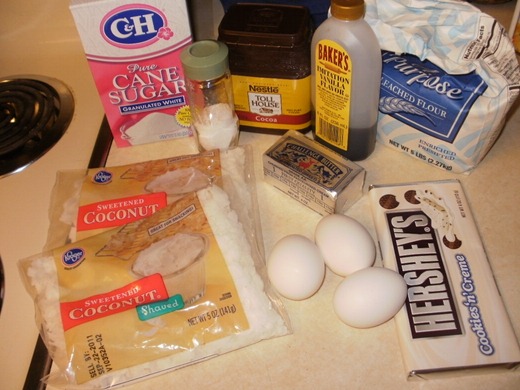 These are the ingredients needed to create an edible Moonscape. Some of these were doubled, as I needed to make some extra bedrock, which I flavored with two packets of that Starbucks Via instant coffee. Additionally, I used 10 oz of coconut, and an extra splash of milk, to increase the bulk of my regolith. 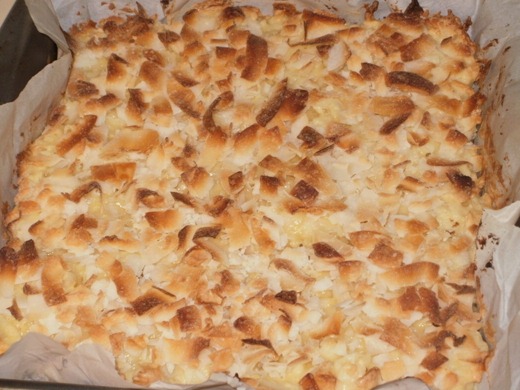 And this is the Moon, post-baking! Note how that regolith seems soft and fluffy. 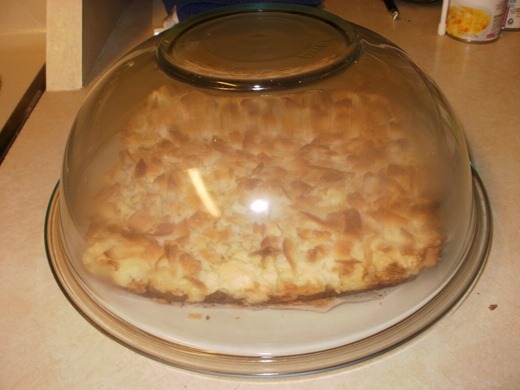 This is a futuristic moon bubble, to protect this patch of regolith from any wandering spacemen… 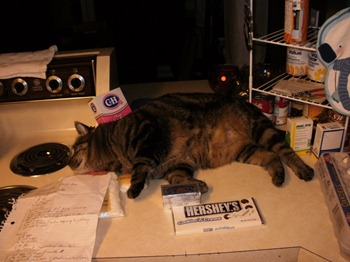 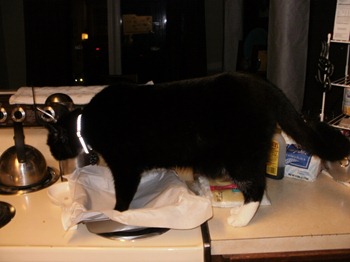 … of which there were several, repeatedly! Colonizing in Moon lava tubes might be a better idea after all… 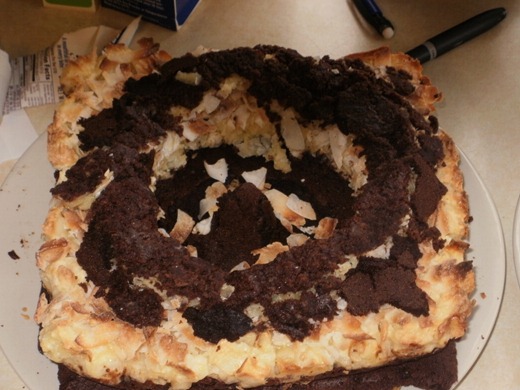 After everything had a chance to cool, I set about to make the crater. (We’ll discuss actual crater formation in a minute!)

To do this, I punched a hole in the coconut slab, and set it atop the brownie bedrock layer. There was some minor excavation of that layer as well. Using bits of brownie, I constructed the central peak of the crater, and placed some fragmented bedrock inside the crater. Using the extra coconut slab, I carefully compiled a reverse layer of ejecta around the crater. 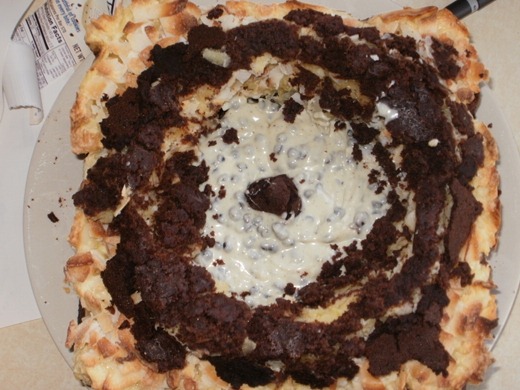 To prepare the melt for the inside of the crater, I melted a Cookies and Crème bar in the microwave (not for too long or it burns!) and poured it into the crater. After engaging in a little careful destruction to create collapsed crater walls, the Moonscape was done! 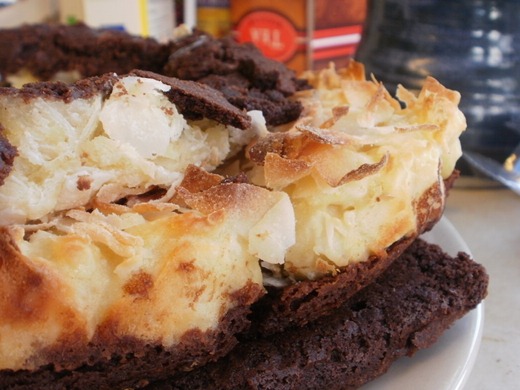 Here’s a close up of the side, giving a better look at the overturned regolith/ejecta layer, and the added bedrock. 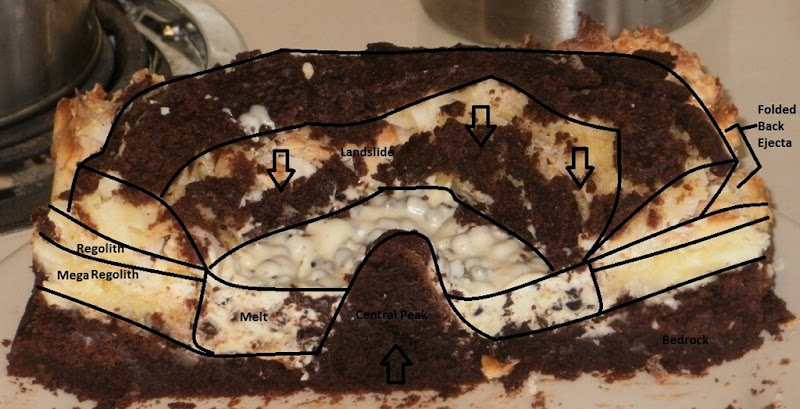 (A simple line diagram of central peak craters is found here, in case the deliciousness of mine is distracting.)

When a meteorite impacts the moon, the ground is rapidly compressed downwards, away from the incoming meteorite. After the  meteorite impacts, this pressure is released, allowing the material to rapidly – and explosively – decompress, creating the crater.

When the compressed regolith rapidly expands, it blows the surrounding regolith away from the crater, creating a ring of over-turned stratigraphy. Because of this phenomenon, the older and deeper material gets thrown farthest from the center of the crater. This is visible in the layer of brownie bedrock atop the ejected coconut.

Frequently, the bedrock in the crater floor is fractured, and magma seeps through to the surface, creating a puddle of magma-cemented breccia, sometimes referred to as “melt” – or, in this case, the melted chocolate. Additionally, the walls of medium and large craters frequently suffer from landslides, due to their tall, steep walls.

Now, there are two scientific inaccuracies in this edible diagram: 1) there should be a larger cloud of finer ejecta, and 2) for the bedrock to be so exposed, the crater should be larger in diameter.

But, space constraints aside, it was a fairly accurate model, and tasty to boot!

(My main references for this were my notes from a planetary geology class I took a couple summers ago. Since those aren't online, I've merely linked to some informative wikipedia pages. Say what you will about wikipedia's accuracy, it's still a good starting point!)

Read this while I was eating dinner, but I'm still hungry! Wanna eat a Moon crater! It looks delish, and soooo much better done than mine!

Loved this! Not enough people are advancing the delicious science of dessertogeology, so thanks a trillion!

This post just rocked my world! You are amazing! And you're Katie's sister-in-law, which is also very cool. Thanks for the awesome science and baking lesson. :)